In Australia, there’s many things we love to enjoy – be it our amazing touch of wilderness, the beaches, or our unusual wildlife. Not to mention, the delicacies from lamingtons to Tim Tams and Vegemite. And the locals! We’re always looking out for each other and setting our visitors on the right path – ensuring they’re fully informed of any snakes, sharks or drop bears. Yet, sometimes it’s more about the little things like sharing a barbeque with some mates and cracking open a cold one on a Friday arvo.

Which got us thinking; what is our nations’ true drinking habits? Is our ‘bevie’ of choice consistent nationwide? Or does our preference vary by state? And thus, the map of Aussie drinking habits was born.

To carry out our due diligence to the wonderful land of down under, we created a survey to investigate our nations’ drinking habits and our findings may shock you. From drink preference to who is the stingiest state, we’re sharing everything you need to know – you’re welcome!

We’re a nation of beer drinkers

It’s true, Aussies are certainly living out a long-term love affair with getting on the beers with wine coming in a close second place. We also found that our New South Wales respondents were particularly in the ‘spirit’ for a drink, with 4% of the state reaching for a drink “late morning”.

Many of us can also confirm that we LOVE a cocktail, however over half of Aussies (57%) don’t have the first idea on how to make one! Luckily, our team at Honeysuckle Distillery have you covered with our two ranges of Aussie-made, pre-mixed Hard Sodas and Spritz.

If it’s the aesthetics you’re after (because what’s a cocktail without an Insta-worthy snap), then simply incorporate some garnishing to jazz up your Spritz. This is also a great way to enhance our natural and exotic flavour combinations such as the blood orange and warming cinnamon found in the Paradise Gin Spritz – you may thank us later.

We are a nation with a taste for adventure

As you know, Honeysuckle Distillery is all about nature, the outdoors and adventure! We were excited to learn Aussies are also fans of trying new things, with a quarter of us having tried a new alcoholic drink in the past week alone. In Particular, Queenslanders are the most adventurous with 86% respondents affirming they love to try new tipples.

However, your Queenslander friend may not be your first invite for a night out as we also found their adventurous nature isn’t matched with a generous one. It turns out they are also the stingiest state – with almost half admitting they wouldn’t buy a drink for a mate if they weren’t expecting one back.

But with the intention to cut our fellow Queenslanders some slack, we also found Nationally we don’t fare much better – with a third of us declining to offer friends a drink if the gesture wasn’t returned.

Looking to broaden your horizons and embark on a new taste adventure? Pack in a couple of our Hard Soda range for your next trip. With a splash of vodka, some straight talking soda and a choice between Natural Berry or Natural Lime flavours they’re both crisp and refreshing. Whilst we encourage you to share the experience, we can’t blame you if you decide to keep them for yourself!

We love a good social drink

No surprises here, as mentioned earlier we love to spend time with friends and family whilst catching up over a drink. But which state really goes all out? Well, the unexpected ballers of our nation are… the Tasmanians, who have the highest proportion of big spenders. These guys have the highest ratio of folks regularly spending $150 or more on an average night out at a bar.

The Apple Isle is also the home of the most social drinkers – where most people enjoy drinking at house parties and barbecues as their favourite drinking occasions (28.6% respectively).

However, regardless of which state you’re based, if this sounds like you we’ve got you sorted for you next social gathering. With our Hard Soda and Spritz ranges available online and via select stores nationally it has never been easier to get your hands on some Honeysuckle Distillery.

Distilled to be wild, the ranges even omit the need to be able to make a cocktail. Which, well, makes them perfect for Aussies. 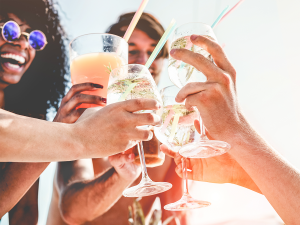 Our premix guide for events and celebrations
Menu